I have been thinking about Pink Champagne cupcakes for a while now.  I remembered last year that a local grocery store (I think Hy-Vee or Cosentino’s Price Chopper) had them but told me they were seasonal and this was last January if memory serves me.      Why the month stuck in my head was because I would have thought they would be seasonal for February because of Valentine’s Day not in January    I recently went to the grocery store I thought had them last year but I didn’t find them.  The bakery department was closed so I could not ask anyone at the time. I had planned on going back a different day.  Fast forward to today when I was thinking about them so I googled pink champagne cupcakes in Kansas City.  It was in this search I came across 3 Women and an Oven bakery   After looking at the website for a few minutes I went through their Instagram photos and thought everything on there looked amazing.  The detailing on their cakes and cookies was beautiful. I was excited to try them.  Even though their location really isn’t on my way home or even close to anywhere I go I thought it would be worth the trip to try to make it before they close at 6 PM.   Their cupcakes are $3.75 and their babycakes ( mini bundt cakes) are $2.25. The products were nicely displayed and sparkled in the light.   As I was checking out, I saw where they sold the “fairy dust” to make your own cakes sparkle.

Pink Champagne cupcake from 3 Women and an Oven

I Purchased a small assortment of cupcakes and the baby cakes. I was excited to try them so decided to try one of the mini cakes as I drove home.  The first thing I noticed was the frosting was a little hard. I took a bite and could not believe how dry it was and the cake was cold.  I took another bite and yes, it was very dry. It was lemon raspberry so I was thinking perhaps the fruit affected the cake but you would think it would make it moister, not dryer.  I decided to try the red velvet mini cake.  It was also dry. It had a nice flavor to it, but was so dry it wasn’t enjoyable.

I decided to wait until I arrived at home to try any more.  I wanted them to warm up a little to see if it made a difference.

I opened the box when I arrived home and was disappointed to see the lemon candy had fallen off the Lemon Drop Cupcake.  The frosting was so hard I could only sit it back on to take a picture, I couldn’t place it back into the frosting. Now, I do want to point out, as someone who likes frosting, there is a nice amount of frosting on their cupcakes. It would be nice to see if it is soft when they are freshly made.

I decided to try small bites of the remaining cakes because I was afraid if I waited until the next day,  they would be too dry to even eat.

The mini carrot cake was next.  It was moister and had warmed up, but I have to say the flavor was lacking slightly in my opinion.  So far, my excitement over these cupcakes was dwindling and I hadn’t even tried the main reason for my purchase; the Pink Champagne cupcake!

The almond cake was next. It was so cute.  The small almond sliver on top. The cake sparkled in the light.  The cake was moist, the frosting was dry, but the flavor was amazing! So far this was my favorite! I have to admit, even though I had more to try, I ended up eating the whole mini cake!

I decided to take a little break to avoid a huge sugar rush but knew I’d come back to them before the night was over. 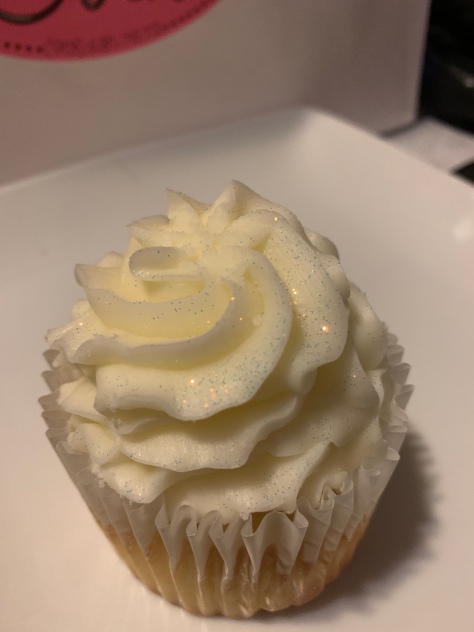 After a small break, I decided I needed to try a cupcake.  I had been focused on the mini cakes because they were easier to try small bites of.  I cut a small piece of the lemon drop cupcake out, making sure to get frosting and cake.  It was very lemony   The cake was heavy and dense   The frosting was stiff and a little dry except around the cake   There it was softer and easier to eat. I placed the remaining cupcake in an airtight container to finish tomorrow at lunch.  One thing I would say, and this is just my opinion, but if there had been a little bit of lemon filling in the cake, I think I would have liked it a little more.

Next, I tried the mini pink champagne cake. I bought a regular cupcake and a mini one with the hope of taking the mini one to work the next day to eat at lunch. It was the only flavor I duplicated.  I took a small bite and was sadly disappointed.  The cake had a burnt flavor to it! While it didn’t appear to be burnt, it still tasted burnt.  I could not taste any of the pink champagne taste I remembered from the grocery store ones I fell in love with the year before.  Had I had this one first, I know I would not have driven 30 minutes out of my way to get more.  Oddly enough, it also left a weird after taste.  While I’m typing this I can still taste it and not in a pleasant way.

Now the time had come for me to try the Pink Champagne cupcake.  I had taken another break.  My palette was clean.  I have to be honest, I wasn’t as excited as I was earlier in the evening, especially after having the mini one but I thought, perhaps it’s a different batch than the mini one. Maybe I will be pleasantly surprised.

I do have to give them credit, the appearance of the cupcakes are beautiful.  The frosting looks delicious, the cakes sparkle.

I did not cut a small piece on this one.  I decided to take a bite the way a cupcake was meant to be consumed.  I took a bite, making sure to get frosting and cake. The frosting was moister than some of the other cakes.  From the size of the cupcake, it was difficult to get a bite from top to bottom, so the cupcake was a good size. The flavor was disappointing.  It had that same burnt flavor but I could taste some of the “champagne” flavor in the cupcake, which I could not taste in the mini cake.  I couldn’t tell if it was a burnt flavor or if the champagne flavoring was just off or maybe even old tasting.  I wish I could explain it, but it tasted old or burnt.  I did decide to wrap this one up in an airtight container as well and if I get a different taste tomorrow, I will definitely share.

Overall, 5 flavors and only 1 would I want to purchase again. The almond cake.  Perhaps if I was eating a fresh one I might have a different take on a couple of them, but flavor is flavor and some of them were lacking in that area.

I love cupcakes but don’t see myself making the trip to south Overland Park to purchase cupcakes from them again.  I have found other places around Kansas City who can do an almond cake just as good.  My quest to find an amazing Pink Champagne cupcake continues!

What are your favorite go to cupcake places?  Doesn’t have to be just in Kansas City, I’d like to hear your favorite place in your city!