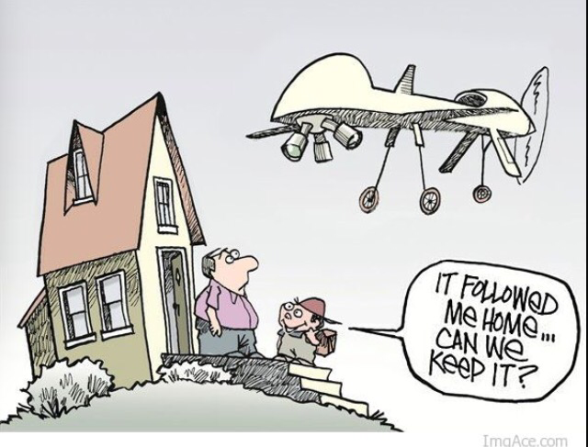 I am fascinated by drones and their technology.  Technically, a drone is an Unmanned Aerial Vehicle (UAVs).  They come in various shapes, sizes, technology, and functions.  The original concept behind a drone was for them to do something unmanned that could potentially be too risky to do with a manned unit.  The drone can be controlled remotely or can fly autonomously through software-controlled flight plans in their embedded systems working in conjunction with GPS.  The military has been using them for years.  Some of them will amaze you on their size and capabilities.

Drones aren’t just for military use though.  Back in 2013, Amazon introduced us to their concept of Amazon Prime Air where they would have drones deliver packages to customers within 30 minutes of purchase in some markets.  Their goal was to have this feature up and running by 2015.

Here is it, 2015, and Amazon was hit with a lot of concerns over the last couple of years.  U.S. Federal Aviation Administration (FAA) considers anything flying under 400 feet and in an operator’s line of sight to be a model airplane and you do not need a license to operate them. Since Amazon’s drones would not be within the line of site of an operator, FAA has been reluctant to allow this to move forward.  Other concerns Amazon faced were the drones getting caught in trees or poles, not being able to sense objects in their way quick enough, the drones being hacked into, and even theft of the package or the drone as it was in flight. 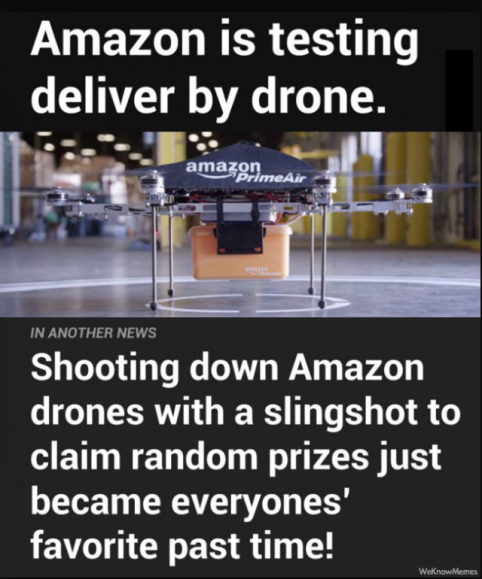 These are all very valid concerns considering the drones would not be watched.  Another problem Amazon faces is the fact that, since FAA is so slow to make decisions regarding the drones, by the time anything is approved to move forward, the drone they had under consideration is already obsolete and the new one has to be considered.

Just recently, there were considerable new advancements regarding Amazon Prime Air.  The FAA granted Amazon an experimental certificate where they can conduct some tests and experiments with certain drones.  Is it a win for Amazon?  Not quite.  The certificate comes with a lot of rules attached.  The flights must be done during daylight hours, must stay under 400 feet, and has to remain in the line of sight of an operator.  What I find interesting about these rules is that it sounds like they are saying, hey, it’s ok to go ahead and operate a drone as a model airplane, which is not what Amazon wants.  But, that’s not all!  The FAA takes it one step further and has said the operator must possess a private pilot license and recent medical certification!  Amazon must also provide monthly updates to the FAA, breaking down the number of flights and any pertinent information regarding hardware or software failure.  Another policy, which I found to be very restricting, is that they drone is not allowed to fly over anyone who is not in control of it.  So not only do these LICENSED PILOTS have to stay within sight of the drone, be in complete control of the drone, they also have to make sure it doesn’t go over anyone’s head as it’s flying to its destination! It seems like a feature Amazon hoped to be able to offer to their customers just got extremely complicated. Amazon admits it is already offering drone delivery in some countries where the regulations are not so restricted.  It would seem to me the FAA would take some of those test studies into account, but it doesn’t appear that they are.

Amazon isn’t the only company experimenting with Drones for delivery.  Dominos tested drones in the London area to deliver pizzas with some great success.  The pizza’s arrived quickly and were still hot.

While I admire the technology of companies using them for delivery, I am even more fascinated with the advancing technology in drones available to the average person, well, based on the price, maybe not the average person, but still available for the private consumer.  The one I am currently in love with is the Airdog auto follow action sports drone.  This drone tracks you where you are.  You set the angle and height you want it to be and then take off doing whatever action you are doing and it stays with you!  It has built-in stabilizers to keep the video clear and crisp. All I can think about is the number of ways this technology could be used.  To be able to get a bird’s eye view of any activity or event you are doing would be pretty exciting.  Even a simple trail ride on horseback, you would be able to have a complete video from the day.  Here is a video of it in action.

Of course, the $1300 price tag is a little difficult to swallow!

A close second favorite of mine is the AscTec Firefly with Intel Real Sense Technology. Being safety conscience, I think I like it for its ability to avoid any obstacle, including humans.  German designed, it uses 6 Real Sense cameras to create a 360 degree view to provide autonomy and more safety.  This one is more fascinating to me because of the technology aspect, not necessarily as one for the average person to purchase.

The technology of drones continues to improve every year and I am sure we will continue to be amazed by them.

The FAA estimates private drones will be a $90 Billion industry within the next ten years.  Guess I’m not the only one fascinated by them!

This was originally posted on Randomocity Podcast Network’s Site March 26, 2015