I went to see ‘The Gunman‘ at AMC Independence Commons in Independence, MO.  The movie is based on a novel by Jean-Patrick Manchette, directed by Pierre Morel, and starring Sean Penn, Jasmine Trinca, Peter Franzen, Javier Bardem, Ray Winstone, Mark Rylance, and Idris Elba.  Good names, strong director, should be interesting.

Jim Terrier (Sean Penn) is a former special ops soldier working in the private sector over in the Congo.  He’s a trained sniper with orders to take the Minister of Mines out.  After completing the mission, he had to immediately leave the continent, and leave his love interest, Annie (Jasmine Trinca), behind.  We catch up with Penn eight years later, back working in the Congo, this time for a good cause.  It appears he is trying to right all of the wrongs (killings) he had done in the past. While working, an attempt is made on his life and the remainder of the movie is focused on him trying to figure out WHO is trying to kill him, WHY they are trying to kill him, and him trying to stop it.  All the while, he is dealing with Traumatic Brain Injury (TBI) leading to early onset Alzheimer’s.  While in the process of reuniting with his former security team, he learns Annie went on to marry Felix (Javier Bardem).  Felix was the one who had ordered Terrier to kill the Minister and had assured him he would take good care of Annie.  Terrier also learns there is an ongoing investigation on the killing of the Minister of Mines and that Interpol is looking for him and the others involved.

The beginning was difficult to watch.  When the actors spoke, they sounded muffled, more so than just because they are talking in low tones; the images moved fast, almost giving you a swim feeling.  I was concerned about it being like that throughout the whole movie.  Luckily, it wasn’t.

After about the first fifteen minutes, the movie caught my attention and kept it throughout.  I enjoy good action movies, even if I tend to be a little squeamish at the blood scenes! I am what you would call a “close my eyes, I can’t watch, then I peek through my eyelashes” watcher when it comes to more of the gruesome scenes.  I can’t help it, even when I try to watch, it just happens. I will admit, there were plenty of scenes throughout the movie where I caught myself doing it.  Even when I tried to watch them, I’d flinch, close my eyes, and force them open again!  I’m sure the person sitting next to me was laughing at me!

The attention to detail seemed hit or miss throughout the movie, which was a little disappointing.  In an interview with Collider, Penn shared with them why he helped write the movie and how he worked with different consultants to bring authenticity to various scenes throughout.  This work was evident in the scenes where special op training came into play.  Those details and scenes were good.  The action scenes were suspenseful.  You know something is about to happen, you just don’t know what exactly.

One of the misses in the attention to detail was in regards to the TBI.  It went in and out of staying true to a character who would have this disease.  When it was convenient for him to have symptoms to make the movie interesting, it was front and center, when it wasn’t convenient, it just magically disappeared.  The movie touched on how he had been suffering with the symptoms long before he was ever diagnosed because he wrote everything down and had for years.  He was meticulous in keeping these books safe.  He was a trained killer.  The fact that he lost one of the books in such a sloppy way made for a good movie scene, but was another miss in the attention to detail you would expect from Terrier.

One scene, in particular seemed a little over the top.  It takes place out in a country home that just didn’t seem realistic, from the lack of security, to the number of staff members in the home.  The scene, as a whole, was played out a little long.  It was in this scene Felix gets killed and Annie goes with Terrier.

I was disappointed in how they portrayed Annie.  It was clear the two were in love in the beginning and it was clear from the beginning the feelings Felix had for Annie so it was not a surprise he wanted Terrier out of the way.  What wasn’t clear was how Annie could be such a strong woman to work as a doctor in the Congo during difficult times, yet acted so weak at other times in the movie.  As a doctor, she would have picked up on some of the symptoms of the TBI in Penn’s character, yet there never seemed to be a mention of it, it was as if she was completely in the dark.

We learn Interpol Office DuPont (Idris Elba) had been watching Terrier in his quest to catch up with Felix and the others.  He manages to have a cryptic conversation with Terrier and leaves him his business card instead of picking him up, knowing he was close to leading them to the others.

The last main scene had me confused.  Penn made a phone call to DuPont asking for some backup, but for Interpol to have been so close to him throughout the movie, always tailing him or watching him on camera, help didn’t arrive until everything was over with.  The timing just seemed far-fetched. 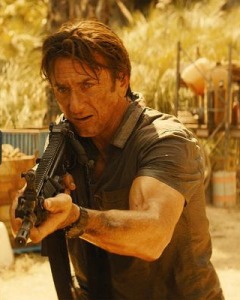 All in all, I felt Penn did a great job in the movie.  You felt his emotions coming across the screen.  His character had depth and passion about trying to atone for something he did, even though it was at the direction of someone else and it was his job at the time.

Some of the movie was predictable but I didn’t feel like it took too much away from the movie itself.  Bottom line, as a story, it wasn’t the best.  As an action movie; combining Penn’s acting with Morel’s ability to direct some great action scenes, leads to a pretty good action movie.